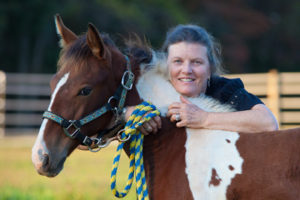 People often ask me, “When did you discover you wanted horses in your life?” I can honestly say that it is so far back that I can’t remember. I would say that I have definitely been a life-long student of equine language. My parents have told me that it began when I was three years old. That I would get very excited about seeing a horse, foal or pony if one was spotted while driving down the road. I have been told that even at this early age, everything I attempted to draw or wanted to color had to revolve around a horse.

When I was five, we moved to a farm in Bedford, Virginia and our next door neighbor had a spotted horse that I would talk to every day across the fence. I don’t remember his name but I remember that I thought he was absolutely beautiful. I told him all of my secrets and dreams. I remember gazing into his eyes and thinking he must know what I was thinking.

Every chance I got, I would plead my case for a horse and my parents finally caved and purchased one for me when I was eight. It feels like my horses have always been a part of my life like breathing air. This gift was the beginning of a life-long journey with horses.

For more than twenty-five years, I raised, trained, bred and showed Arabians, Anglo-Arabians, Andalusians and Paso Finos. I was consumed by the desire to master the disciplines of Western, Hunter and Dressage in the show world and won numerous championships. Then I decided I needed more of a personal challenge so I began conditioning my personable Paso Fino stallion, Centauro La Estrella, for competitive trail competitions. We hit the trails and never looked back at the show world. We discovered a connection that was far beyond what we had in the show ring. He depended on me, and I on him, to keep each other healthy and safe on the trails. He was my rock when my daughter’s father passed away and when I sought my first divorce. Again, I felt I could remove my guard when I was with Centauro and bear my fears and doubts. His shoulder was there for me when I needed to cry and he carried me like the wind when I needed to feel alive and free.

After obtaining my undergraduate degree in psychology and education, I owned and operated my own sixty stall horse facility in Amherst County, Virginia for nearly fifteen years offering full-services while also working full-time as a professional Virginia Certified Family Mediator. While on the farm, I personally trained horses, mucked stalls, bedded stalls, stood stallions, foaled mares, weaned babies, hauled horses, purchased and sold horses and provided riding lessons on a near daily basis. During this period, I was a 4-H Leader, Pony Club Instructor and Dressage Competitor selling horses to new owners across the United States. This experience and exposure propelled my business well beyond local recognition into a national status.

About ten years ago, I decided it was time to slow down a little and enjoy my own horses more at a deeper level. I still was mediating more than 500 family cases a year and I suppose it is like many areas of our life as we mature, our priorities shift and change. I felt I had been successful in the horse business and my mediation practice but needed more time with my own horses. My gentle but highly effective horse training methods create more trust, less stress and a better partnership for the horse and the horse owner. My life experiences and experiences with multiple horse breeds in many disciplines have given me a wealth of knowledge that I want to share with horses and horse owners as well as those in struggling personal relationships.

Since 1996, I have raised, trained and ridden Spotted Saddle Horses and Rocky Mountain Horses. I often have stock ranging from suckling to mature horses since sales are not my primary focus. My husband and I live at Bellamy Farms near the Blue Ridge Mountains of Virginia and enjoy long distance trail riding in the George Washington National Forest many weekends a year on horses we have raised and trained. We strive to raise well-mannered, athletic, good-minded horses that are a pleasure to be with or partner with. Our passion for trail riding seems stronger year-to-year as our way to get away from the hub-bub of daily life and enjoy each other’s company on the back of our horse while surrounded by nature. If you desire more information about the farm, please visit www.bellamyfarms.com.

In recent years, I have felt there was so much more to horses than we as humans understand so I began searching for answers. I met Melisa Pearce at the Virginia Horse Extravaganza and realized she was a leader in the horse healing movement and I wanted to know more. Shortly thereafter, I enrolled in her curriculum and eighteen months later became certified in Equine Gestalt Coaching after completing more than 82 class hours, 36 coaching sessions and 375 hours of intensive on-site training.

I feel my extensive background in psychology, conflict transformation, the “language of equus” and years of personal experiences with hundreds of horses has prepared and led me to where I am today. My equine gestalt coaching methods combine intuitiveness, energy, somatic awareness and positive coaching skills along with my horse as my partner to provide the participant with real experiences that become transformational moments; my equine trust-based partnership training methods are taught in a cooperative manner so the horse and the horse owner learn to dance through life together with a stronger understanding of each other; and my one-on-one relationship coaching has helped many understanding their past and provide them with the tools to create a more fulfilling relationship in their lives.